A LONG-FORGOTTEN TRUTH by Rachel Ballard 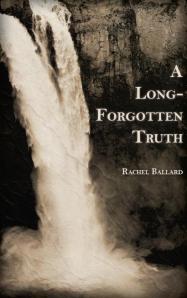 Order A Long-Forgotten Truth through Ingram, Barnes & Noble, and Amazon!

About A Long-Forgotten Truth

Gail Cavanaugh is eighteen when she unearths a long-held family secret. Haunted by a persistent, ghostly voice inside her head, Gail is propelled west on a highway journey away from the father she’s always known. Guided by her ghost, searching for the truth about her origins, she lands broken-down in Sylver, a mountain town in Northwest Washington, half a continent away from home. Trapped and cashless, Gail is swept up in the lives of three people with their own tangled longings and imperfections. Their haunted yearning is a perfect match for Gail and her ghost. Amongst past and present secrets, Sylver becomes a place Gail can’t escape even years after she’s left for good.

Unapologetically nostalgic, A Long-Forgotten Truth is an engrossing, road-bound literary novel, a startling debut, perfect for the wanderer in all of us.

Rachel Ballard received her Master’s of Fine Arts in Creative Writing from the Rainier Writing Workshop at Pacific Lutheran University. Her work has been published in Pass the Fire: Stories about Service in America, and Jeopardy Magazine. She lives in the company of wonderful friends in beautiful Bellingham, Washington. This is her first novel.

Meet Rachel Ballard! Author of Rozlyn Press’s inaugural novel, A Long-Forgotten Truth. We are very pleased to be working with Rachel and so excited about her upcoming release that we wanted to share some tidbits about her and her work with you!

1. Tell us a bit about yourself, where are you from, and how did you get there?
I’m originally from a Seattle suburb called Mercer Island but I’ve lived for over ten years in my former college town of Bellingham, Washington, and it is truly home.

2. What made you want to be a writer?
I think that I have always searched for a way to corral the proverbial voices in my head. I feel very fortunate that with writing fiction—the novel form in particular—I’ve found an artistic pursuit that feels so completely right to me.

Two specific moments do come to mind, however, both when I was still in high school. My sister came home from college for the summer and brought a dubbed cassette tape of Bob Dylan’s Blood on the Tracks and said, “You have to listen to this.” I was completely blown away by Dylan’s capacity to evoke such longing, such bittersweetness. I loved the music, but it was the power of his lyrics that really got to me. I felt like I had to try to make my own magic with words.

The other moment I remember was during a somewhat lonely and isolated senior year in high school, when I roiled with all that adulthood looming on the horizon. I took to ditching school to visit Snoqualmie Falls, about 30 miles east of Seattle. As I stared at the falling water I began to imagine a girl around my age, and felt a tiny golden seed inside of me, something that said, What if there’s this lonesome girl, and a waterfall saves her life? That seed never left me, and I just had to write this book.

3. In your words, what is A Long-Forgotten Truth about?
A Long-Forgotten Truth, at its core, is about longing and belonging. It’s about the imperfect nature of our deepest loves. I also describe it as a coming-of-age ghost story. The protagonist, Gail Cavanaugh, is a girl haunted by a persistent, ghostly voice in her head. After Gail’s father reveals a shocking, irreconcilable truth about her origins, Gail’s ghost-voice propels her west on a highway journey away from her hometown of Duluth, Minnesota. She lands broken-down in a mountain town in Northwestern Washington called Sylver. The town is situated on the bank of a river also named Sylver. While trapped and cashless in Sylver, Gail becomes entangled in the lives of three people who are in the midst of reconciling their own longings and imperfections. Their haunted yearning is a perfect match for Gail’s, and Sylver becomes a place Gail can’t escape even years after she’s left for good. This novel is unapologetically nostalgic, as Gail’s love for her father’s old Plymouth Valiant and his record collection suggest, as well as the two-lane highway she traverses on her westward escape. The title comes from the Dylan song “Something There is About You” off his Planet Waves album, which is, in itself, a very nostalgic piece of art. I intend for A Long-Forgotten Truth to be a singular experience, like putting on a favorite record on a rainy afternoon. Even after the needle lifts, a feeling lingers.

5. How about some fun questions? If you were a tree or animal what kind would you be?
That’s tough. I might like to be my cat, just because I’d love to get in her head. I especially wonder why she spends so much time in the empty bathtub.

Or I’d be a silver birch tree, because they are so spare and beautiful in winter. I feel like I could reconcile my tenuous relationship with cold weather if I were a silver birch.

6. What’s the last movie you went to see?
Well, I hate to admit it, but it was the new Tron movie. What can I say, I love nostalgia! But the last really good movie I saw was 127 Hours. It’s very intense and engaging and I highly recommend it.

7. If you were stranded on a desert island with only one book which would you pick?
Wow, that is a really tough question! I would have to go with Michael Chabon’s debut novel, The Mysteries of Pittsburgh. I have read it possibly ten times, and I never get tired of it. Chabon has an alchemical ability to put words together and make them more than you ever imagined they could be.

8. Chips or crackers?
Popcorn! It’s my desert island food. I’ll eat it while I read The Mysteries of Pittsburgh over and over.

9. Who and what are some of your other favorite writers and novels?
Other books by Michael Chabon are definitely among my favorites, The Amazing Adventures of Kavalier and Clay especially. An early influence was Kerouac’s On the Road, which I finished late one night in a pensione in Italy at the impressionable age of eighteen. I was so enamored with that book that I hugged it to me all night as I slept. Marilynne Robinson’s Housekeeping is also one of my favorites. Another book that a good friend introduced me to fairly recently, and that I find completely magical, is Russell Hoban’s The Lion of Boaz-Jachin and Jachin-Boaz. I love Mary Francois Rockcastle’s Rainy Lake. There are so many others! I’ll just name a few more writers: Vladimir Nabokov, F. Scott Fitzgerald, Jane Austen, Barbara Kingsolver, Carlos Ruiz Zafon, Tana French, David James Duncan, Carol Shields, James Welch, Mary Doria Russell, and Elizabeth McCracken. And Robert Hass is my absolute favorite poet. Ok, I’ll stop now, even though I’m sure there are many books and writers I’ve left out!

10. Who or what in your life influenced you to write?
Immensely encouraging and supportive parents and educators have been crucial. Also, every book I’ve read that feels completely transporting. I love when you can just sink into a book and let the world go on all around you. Music has influenced me a great deal, from Bob Dylan to the many amazing local musicians I get to see perform on a regular basis. I have the good fortune of living in an incredibly creative community, and my friends definitely influence me.

11. Other than writing, what else do you do to pass the time?
I walk in the woods. I go see bands. I have late-night conversations with friends. I play bass for my brilliant friend Anna Arvan’s band, I Love You Avalanche. I’ve been doing a little songwriting myself lately, but I’m definitely new to it! I also have a 1980s Peugeot bicycle that I love inordinately and ride around town as much as I can.

12. If you won a multi-million dollar lottery what would you do with your winnings?
I would probably fritter it away on restaurant meals, fancy cheese, wine, and chocolate. But if I did manage to save some, hmm. I would definitely want to do a world book tour! I did the first half of a five-hundred mile walking pilgrimage in Spain called the Camino de Santiago about four years ago, and I’d really like to go back and finish. I’d buy my mom a condo in Maui with the stipulation that I could show up uninvited at any moment. I’d support local arts and music, as well as try to get artistic and literary opportunities out there for more people who are struggling. I’d love to start an artists’ retreat center here in Bellingham.

13. Do you like frogs?
Yeah, but I feel more of an affinity with lizards because we had a couple of them when I was a kid. Their names were Beth and Bob.

14. What’s your favorite vegetable?
Another tough question! I am really into kale right now because I recently discovered that you can put it on top of pizza or nachos and it gets all crispy and tasty in the oven. I also get to tell myself that I’m eating healthy!

15. Is there anything else you want Rozlyn readers to know?
I am currently working on my second novel, tentatively titled ‘Hamster Blues. It’s set here in Bellingham and I like to describe it as my ‘hipster Lolita,’ but there will be many liberties and departures within that premise. I think it’ll be a good read. I’m definitely having a lot of fun writing it!

I’d also like readers to know that I’m thrilled and honored that A Long-Forgotten Truth will be Rozlyn Press’s first release!

2 responses to “A LONG-FORGOTTEN TRUTH by Rachel Ballard”